The ten most popular historical sights in Bulgaria 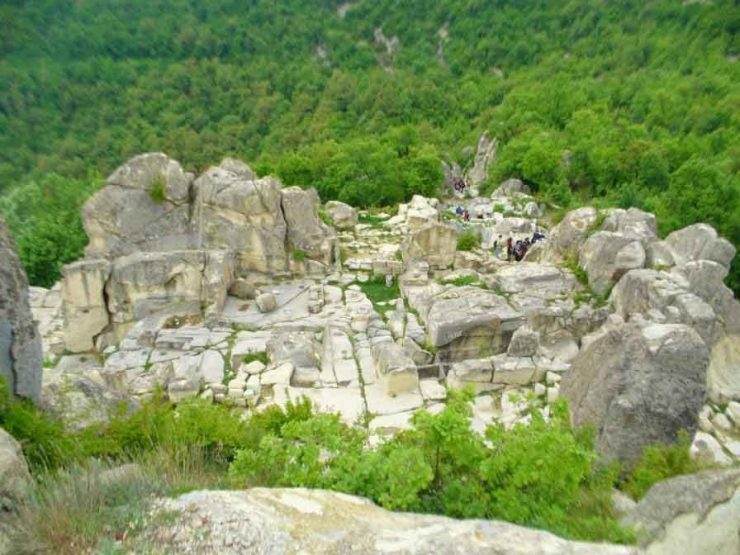 Bulgaria has a rich, 1300 years old history, there are amazing sights in many places on its territory and though they are not so famous like the pyramids in Egypt, The Parthenon in Greece, Stonehenge in UK, etc, most of them are worthy of admiration too. Some useful information about the top ten amongst them could change the opinion of any skeptical tourist:

Perperikon is the name of an ancient Thracian sanctuary of the satri tribe, located in East Rodopi Mountain. It was a large megalithic city, with a castle with thick, stone walls and big altar for animal and human sacrifices that were usual for the antiquity. There are about 200 stone steps (wide 3 m.) that led toward the main entrance and in the castle were discovered many sarcophagi with niches for the gifts.

An ancient sight in Rodopi Mountain became important topic lately. Belintash is a rock plateau used by Thracians as a sanctuary, with many carved orifices, niches and steps that form a star map, according to some experts.

One of the most important historical monuments in Bulgaria is the ancient theatre in Plovdiv. Built in the beginning of the II c. A.C, it could seat 7000 spectators. Even today some of the amazing decorations and columns are preserved and in summer time, it’s a perfect place for plays and concerts.

Combining the beauty and practicality of the imposing rocks of Belogradtchik and the skilful made of the ancient builders, The Fortress of Belogradtchik has centuries old history. Build by the Roman Empire, it was used and maintained later by ancient Bulgarians and Turks during the 500 years of Turkish occupation.

A certain prove for the ancient history of Bulgaria are finds like The Treasure of Panagurishte. Discovered near Panagurishte city, the treasure is an ancient, golden drinking set, it belonged to an unknown ruler of the Odrysian Thracian tribe. This beautiful historical heritage consists of nine vessels: a fiala and eight ritons, with magnificent depictions of humans and animals that cleaned the drinks, according to ancient believes. The set was probably used in many religious rituals.

Some of Bulgarian sights are amongst UNESCO’s world historical heritage. One of them is the famous Madara Rider – a bas-relief of a rider, his horse, his hunting dog, an eagle and an agonizing lion, carved in 8th century, in a vertical rock at a height of 23 m. The rider and the animals are depicted in their life-size and the lines near the bas-relief in ancient Greek narrate about the power of The First Bulgarian Country.

Amongst the many fortresses in Bulgaria, probably the most important is Tsarevec in Veliko Turnovo. Build in 12th century and today located in the middle of the city, it was the main fortress during The Second Bulgarian Kingdom. There is The Baldwin’s Tower, where the captured first Latin Emperor Baldwin I died, jumping from the tall tower.

Being a Christian country, Bulgaria has some incredible monasteries too, the largest and most imposing amongst them is The Rila Monastery. Build in 10th century by the hermit Ivan Rilski and his followers and located in Rila Mountain, the monastery was respected by all the Bulgarian kings until the country was occupied by the Turks. There are amazing, ancient icons in this historical monument, created from 14th until 15th cenntury. Amongst all the incredible views, in the monastery museum, the tourists could see the wooden Cross of Rafael, made of a whole wooden piece with 104 religious scenes and 650 carved little fugures. Named after its creator, it was created in a 12 year period.

There are dark moments in the history of every country and for Bulgaria the most important and horrible is the 500 years of Turkish occupation. The battle for The Shipka Passage was probably of the greatest significance during that period. It lasted 5 months and was the decisive battle for the capitulation of the Turkish army later. There are poems for the feat of the Bulgarian and Russian soldiers who defended the passage and with the free donations of the whole Bulgarian nation, the imposing Monument Of Freedom was build. The exposition inside relates about the heroic moments of the battle.

Another imposing monument in Bulgaria, build in token of the gratefulness of Bulgarians to the Russian liberators after 500 years of Turkish slavery, is the orthodox Temple St. Alexander Nevsky. Located in the capital Sofia and named after the Russian saint – king Alexander Nevsky, it was build in neo-Byzantine style, with many gilded domes, half-domes and cylindrical arches. In the underground floor is located the crypt that today is an art gallery of the ancient and Middle Ages art.

Of course, these are just some of the most important sights; many other deserve to be amongst top ten too.